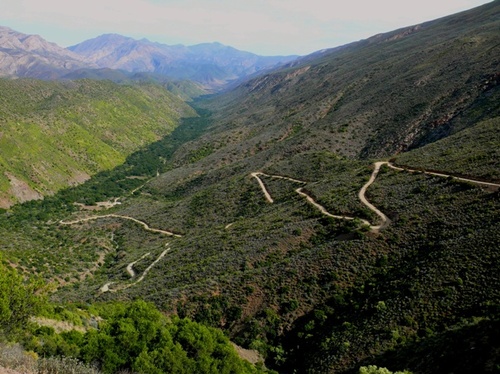 The Gamkaskloof: (also known as ‘Die Hel’) is a narrow isolated valley about 20 miles long with a maximum of 600 feet wide located in the Swartberg Mountain Range.

The valley was declared a National monument in 1997 and was included into the Swartberg Nature Reserve. Subsequently the cottages in the valley have been renovated and equipped with solar power and bathrooms. Camping facilities available.

The pass by which the Gamkaskloof can be accessed drops almost 579 meters very steeply, before it gets to the valley settlement, and it is believed that the name ‘Die Hel’ therefore came from the Afrikaans word “helling or hel” (“steep dip/incline down”).

4trek will take you into Gamkaskloof valley to the Swartberg Nature Reserve area. We will set up a Camp for your convenience with all necessary facilities available. You will receive awesome breakfast in our open dining area, a light lunch and a astonishing supper experience under the awesome milky way of stars.

Prince Albert lies at the entrance to the 27km Swartberg Pass, considered one of the most spectacular mountain passes in the world: an untarred road winds to the summit 1 583 metres  above sea level in steep zig-zags and sudden switchbacks,  with breath-taking views at every turn. The turn-off to Gamkaskloof lies near the summit of the pass.
The entrance is through a narrow Cape sandstone kloof where the eye is drawn upwards by the convoluted rock faces to the sparkling sky above. The only sounds are bubbling water, the wind in the trees and birdsong. Several picnic sites near the river provide tranquil spots to stop and absorb the peace and splendour.
As you drive on you gain your first sight of the valleys and peaks of the Swartberg Pass. The natural characteristics of the Pass are magnificent – as are the man-made features. This was Thomas Bain’s last engineering masterpiece. His construction philosophy, which has stood the test of time was: “A good hat and good boots”.
The dry stone packed retaining walls are amazing, in one place on the southern side the wall is 2,4kms long. They range in height from ½ metre to 13 metres. Laws of friction and cohesion govern the pressure on retaining walls. The bed (ledge, base or shelf) measures up to 1 metre plus up to 300mm at the top. Selected stone was used and laid with grain at right angles to the natural bedding line. The walls were battered (sloped inward) in a rise of 1:6. To illustrate the scale of the highest sections of the walls, Boegoekloof measures 13,1 metres vertically and the second hairpin on the north, 7,3 metres. Pressure on the roadway through traffic has compacted and secured the walls and roadway.
The larger stones on the ledge bedding provided good drainage but further provision was necessary. Bain’s original specifications give “rule of thumb” measurements and clear instructions as to how many culverts, side drains etc. there were to be, but it is not stated how these were arrived at. What is clear is that they appear adequate, for after over a century of rain the walls are essentially still in place and until recently, with little or no damage.
In September 2000, a concerned group of design and construction professionals from Prince Albert initiated a crisis meeting with the Provincial and District Roads Engineers to discuss their difficulties in providing adequate maintenance of the Pass after the bouts of heavy rains over the past three years. The meeting resulted in all concerned walking the Pass to discuss specific problem areas and a folio of photographs and drawings was handed over. The Pass underwent specialist maintenance and Prince Alberters were delighted to see their old friend (declared a National Monument in its Centenary year 1988) receiving such a comprehensive facelift.  A further maintenance project was started in 2012.
Along the way there are relics of an old prison, toll hut, hotel and other interesting historical sites.
Often covered in snow in winter, the mountains’ unique micro-climate supports fynbos and a rich bird population, in contrast with the arid zone flora and fauna outside its cool, shady kloofs. Watch out for black eagles and klipspringers.
The Swartberg Pass is now part of a World Heritage Site.

All you need is your personal belongings and off we go

Breakfast will be on a Freestate Farm (Real Farmstyle)

Lunch will be in the Karroo Old Fashioned Picnic.

We will stay over in the charming Karoo village of Prince Albert that draws a multitude of visitors every year.

Prince Albert lies at the entrance to the 27km Swartberg Pass, considered one of the most spectacular mountain passes in the world: an untarred road winds to the summit 1 583 metres above sea level in steep zig-zags and sudden switchbacks. This awaits u after breakfast

We will enjoy the scenery and respect the opportunity of this once in a lifetime opportunity while we slowly conquer the gravel road down to a valley of it own right.

Tonight we will camp in comfortable tented facilities and enjoy Supper under the extraordinary night skies that will move you. The Karoo is just the place to star gaze. Far from major light sources you will see a night sky here that will make you gasp.

We will explore more of this beautiful area before we track back to Prince Albert for another night spend well in this superb little town.

Unfortunately all trips must end.

“IT IS GOOD TO HAVE AN END TO JOURNEY TOWARD, BUT IT IS THE JOURNEY THAT MATTERS,IN THE END”

Are this only for certain ages?

Definitely not. We accommodate all ages and will assist everyone to create an unforgettable experience.

Is this Extreme Off Road.

No. Although this route consist of steep descents and accents, can we assure you that this is no extreme experience. High clearance vehicles are definitely a need during this trip.

Do I need experience?

No not at all. 4Trek have experienced guides to assist you when the need arises.